Posted on January 16, 2012 by mindinthematter 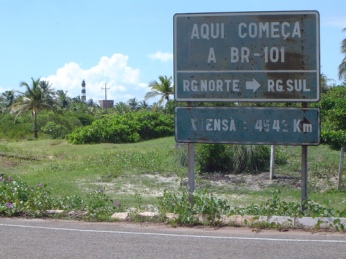 A estrada me leva até sempre..

I am confronting some difficulties deciding my plans for a third visit back to Brazil. These dilemmas are the same visa and money problems, memories coming back to haunt me, memories that plagued my conscience before entering Brazil this time last year. Yet somehow, the unpredictable continent always works out for me and continues to draw me back. I found my first diary of Brazil when setting up in Granada, something I’d thought had been left in the boxes of junk stored away back in Melbourne. Today I opened it up and started reading some of it. It’s interesting to read your past, how you felt, now some four years ago. My language was not as developed then, my experiences of hitch hiking were in their infancy. When I read the extracts I felt like I was reading someone else’s diary, someone else’s story, and it took time to remember and realise, they were my own experiences.

Overall, reading them is a reminder to myself of how far I’ve come, and how beautiful the journey called life truly is.

I have only started hitching, and that is what I need to remind myself, I’m up against the big unknown. Its my third day of it and I sense that two days of luck might reverse itself on the third time. I first of all get a bus to Sao Miguel dos Campos. And from here, I just start walking. For some reason I feel like the roadsides work much better for me. I am not that good at communication, explaining what I want to at the petrol stations- no doubt this is making everything much harder for me. Walking by the sugar cane a guy approaches and asks me where I want to go, and I tell him. The he starts asking me if I like girls or guys, I tell him I have a girlfriend, which he understands as boyfriend. Now I am getting asked something, of which I can only understand;

“Blah Blah Blah 10 reais.. Blah voce.. blah blah.. eu.” Followed by him doing an imitation of someone jacking off.

Mmm, I tell him I’m all sweet to keep walking down the road, so no thanks.

Shortly after a guy stops on his moped to take me to the next small sugar cane town, he drops me off, then it starts pouring. The same guy passes again and gives me a lift to Sao Sebastiao, laughing at how wet me and my stuff is. I’m here, this place is at best a couple of houses and a petrol station, and its now dark, I walk towards this lone petrol station in the middle of nowhere, or so it seems. I have given up on today, my energies are low and I start planning tomorrow.

I go inside the petrol station, a really nice waitress offer me a coffee for free and asks ‘Where do you live’, I answer ‘I live in Australia’ to which she responds, ‘Voce mora na estrada?’ (Do you live in the street?) I confirm to her, that no I indeed live in Australia. I start to tell her what I’m doing in Brazil. I sit down and she comes around with a bowl of soup accompanied with a plate of food (for free). I tell her to wait, as I see this guy pull into the servo with Aracaju number plates, I give it my best shot.

Without a delay he replies: Sure, I’ll take you! I chuck my bags into the back of his ute. The day is saved. I get into Aracaju and walk into an internet cafe, I need to try and find the number of tonights couchsurfing host. The boss of the net cafe offers me free accomodation for the night, all the staff are staring at my dripping wet luggage, probably thinking to themselves what the hell washed up off the street. They all admit that they probably would have thought twice about helping me if I said I was Argentinean.

I get the bus from Aracaju to Estancia, hoping to pull a ride from there down the BR 101, the littoral highway the connects the north-east right down to Brazil’s southern states. On arrival, its already getting dark and sure enough, little traffic. Tomorrow is a holiday, Sao Joao, and everything appears dead except the bars. That doesn’t mean I want to stay in this place, but as I walk to the three petrol stations on the roadside it appears that the movements dead. I start contemplating my options. A bum at one of the petrol station asks me what I’m doing, I tell him. He comes back with some free food he scabbed for me, he asks me to take it and feed myself. I kind of feel bad taking food from this bum, I am putting myself in this position after all.

I’m back at the posto (petrol-service-station) again, its a dead one. So I’m off walking as I’m full of energy. I arrive at the rodoviaria, passing by there and continuing onto the next posto I see in the distance which has to be more active than the one I just passed, yet it too yields no results. I go walking further, there is now a favela that runs parallel to the roadside which never seems to end. All of a sudden there is another posto de gasolina, small and inactive. Continuing further I pass a sign that reveals the municipal council limits, the countryside has opened up around me. Its here that I look around, take a big breath and start thumbing it.

I’m waiting ten kilometres now out of Campos, RJ. Ten kilometres that I had myself, walked on foot. I keep walking, thumbing and smiling, hard not too, with landscapes of green rainforested mountains stretching out towards my distant horizons. I’m shortly picked up by a guy, who remains quiet for a while. I always begin with lots of discussion to break the painful silence and so that the energy is relaxed. He isn’t really interested in discussion, and puts on his CD of Madonna. Now I’m starting to pick up gay vibes. I ask him whether he’s heard of Kylie Minogue (given her popularity in global gay culture), he promptly answers, “ai eu adoro ela!” (Oh I love her), so that’s solved.

I use that as a platform to start conversation, along the lines of Kylie Minogue → Australian → I’m Australian. Now I discover something about him. He’s been to medical school at the Faculdade Federal do Rio de Janeiro, studied international law at the University of Coimbra in Portugal. He’s currently working for the Policia Federal, which makes me nervous and I shut my mouth about my expired visa. We stop for Pao de Queijo (Cheesey roll) and coffee, he pays. After that it rains, which makes me grateful that I got picked up early. I tell him of my recent medical problems and how my friend is worried that I might have tuberculosis. From there, he asks me how much weight I’ve lost, then with his hand starts to check under my jaw, then (without warning) starts to feel the ridge near my crutch area. I monitor what he is fact grabbing but I can tell he is just applying medical knowledge. From there he goes into his complicated sexuality, how he has a long term girlfriend, that he now considers just some sort of friend (I wonder how she defines this relationship), then there is this guy he has been seeing on-and-off whenever he is in Rio. I tell him the only thing that matters is that you are true to yourself. He drops me off right in front of the house I needed to go to, wow. He asks whether I want to go out for a round of beers with his friends, then told me quickly that he liked me and commented how it was a pity that I wasn’t gay.